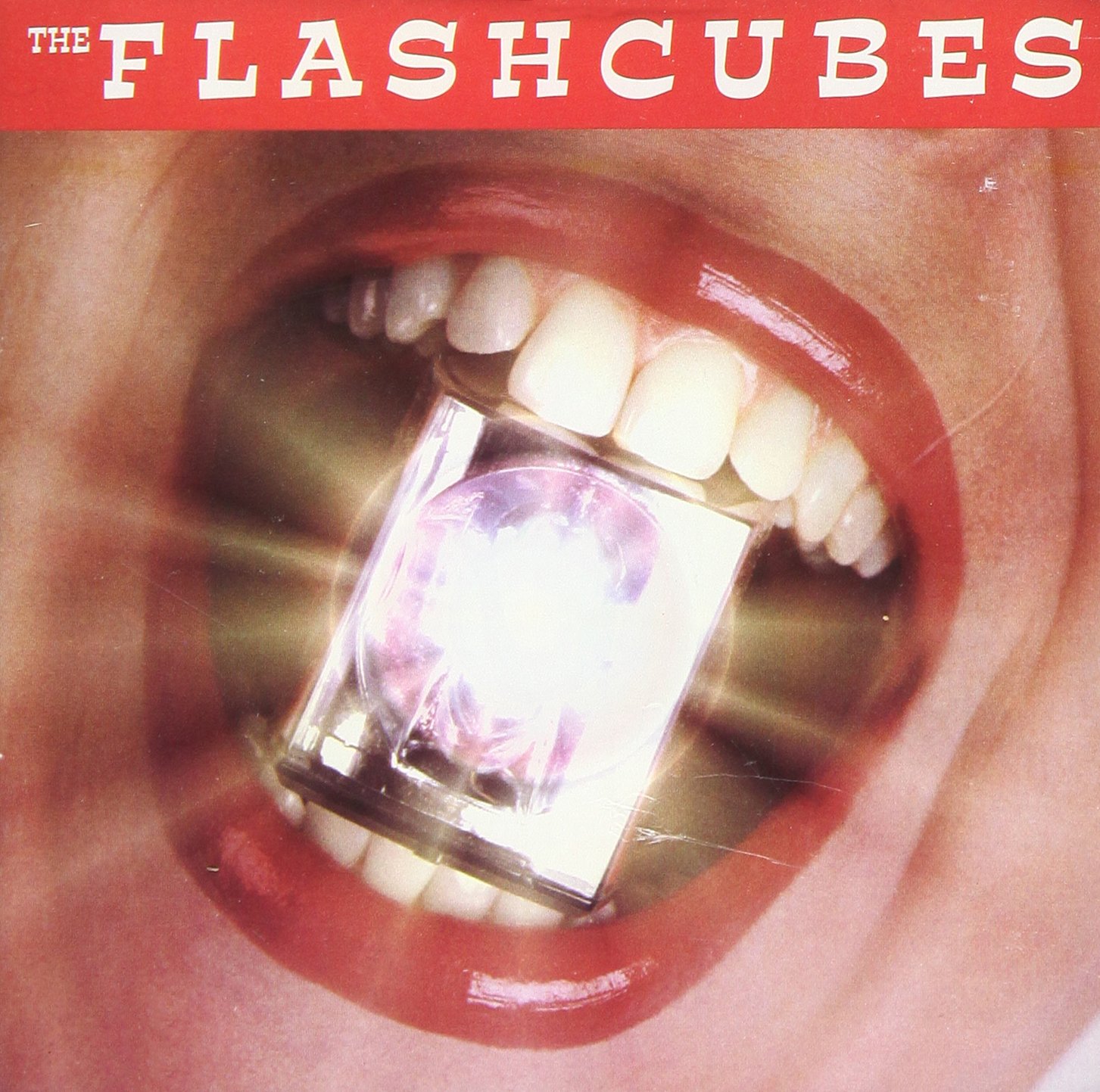 Long overdue Anthology of the much written about, but seldom heard Flashcubes. Combines 16 tracks recorded in their original 1977-1980 period with 4 songs recorded at a 1993 studio reunion, and one live 1978 track.

After listening to the 21 tunes on this disc, it's hard to understand why this band didn't achieve greater notoriety and why Rhino left one of their cuts off of its Poptopia: Power Pop Classics of the 70s disc. Blend many of the artists featured on that Poptopia disc together with Joe Jackson, Elvis Costello, Dwight Twilley, the Knack, the Romantics and Tommy Tutone; toss in some merseybeat, Buckinghams and Cryan' Shames 60s influences - and you've got the Flashcubes! This foursome could deliver everything from mid-tempo pop songs like "Christi Girl," "Misunderstanding" and "She's Not the Girl" to a ballad that Dwight Twilley would be proud to include in his repertoire - "Fourth of July." Thank you, North Side Records! What I missed in the 70s I can now enjoy in the 90s! As an aside, the CD liner notes are excellent and well-researched; and made this reader wonder how many other regional pop bands, from that era and of this caliber, could release similar anthologies. -- Amplifier Magazine

I am very pleased to report that the Flashcubes, and all their wonder, stand the test of time.....They were the Replacements long before Tommy Stinson spilled a beer on his amp....enough top notch material to go head to head with any major pop band... this is a beautiful captured moment. -- Yeah, Yeah, Yeah Magazine

The 21 tracks on BRIGHT LIGHTS provide ample evidence that the Flashcubes were the great lost power pop band of the 70s. This stuff is the equal of virtually any power pop act of that era, surpassing the work of familiar names like the Romantics and the Knack. And the newer tracks - Frenays Its You Tonight and Beverly, Lenins Angry Young Man and Armstrongs savage Shes Leaving - prove that the Flashcubes can be as creative today as they were in the 70s. -- Syracuse New Times

THE FLASHCUBES - A Brief History

The Flashcubes may be the great lost power pop group of the 1970s. Formed in 1977 in the sleepy little city of Syracuse, NY, the Flashcubes combined their love for the timeless British Invasion rock'n' roll of the Beatles, the Kinks, the Hollies and the Who with the high-energy sounds of the punk rockers just starting to make a big noise around that same time. Throw in a healthy reverence for classic power pop acts like Big Star and the Raspberries--and a healthy irreverence for everything else--and you've got a fair picture of what made the Flashcubes shine so brightly.

The Flashcubes are guitarists Paul Armstrong and Arty Lenin, bassist Gary Frenay and drummer Tommy Allen. During their initial lifespan of 1977-1980, the Flashcubes released only two singles, "Christi Girl" and "Wait Til Next Week," on their own Northside Records label. They always seemed on the brink of bigger things--everyone who knew them just presumed the Flashcubes would become stars--but the big things never materialized. Paul was replaced by Mick Walker in '79, and the 'Cubes were history by 1980.

The individual Flashcubes each pursued their own separate visions. Tommy moved to L.A., where he became involved in artist management and production; he worked with the Sighs on their great power pop debut album. Paul started his own band, the Richards, and moved to Boston; the Richards released a great CD, Over TheTop, in 1995. Arty played with power pop icon Paul Collins, and appeared on the Paul Collins Band's 1993 From Town To Town CD. Gary became a solo acoustic act, with two SAMMY (Syracuse Area Music) Awards for best songwriter and two acclaimed CD's, Armory Square amp; Jigsaw People, distributed nationally by Tangible Music.

And all good things come to those who wait. In 1993, Paul, Arty, Gary and Tommy reunited to record four new tracks. One of those tracks, "It's You Tonight," appeared on the first volume of Yellow Pills, Big Deal's justly acclaimed series of power pop compilation CD's. Rhino also dug up "Christi Girl" for inclusion on Come Out And Play, a collection of 70's vintage power pop in the label's D.I.Y. series. The 'Cubes also recorded tracks for The Beat Or Not The Beat, a Paul Collins tribute disc recently issued in Australia, and for a Raspberries tribute disc, Preserved.

The Flashcubes' next project, Bright Lights, is the long-awaited first album from the greatest power pop group you never heard. Bright Lights offers all of the best of the Flashcubes, then and now. Fans of pure pop will delight in the Raspberries groove of "No Promise," unrepentant punks will shake their fists to the angry clatter of "Got No Mind," while anyone who remembers ever being a teenager in love will swoon along to "Christi Girl." And that's just for starters, as the old stuff's been remixed for maximum punch, and the new stuff simply proves that a great band is always a great band. Then and now, the Flashcubes are a great band.

The renewal of their recording career coincides with a renewed commitment to live performances. The past year has brought appearances in Syracuse, Boston, New Jersey, New York City, Rochester and Los Angeles where they were one of the featured acts at the International Pop Overthrow, a pop festival of over 100 bands from around the world.

In the old days, club announcers used to introduce the Flashcubes by promising that someday, very soon from now, the audience would be able to say they saw this band before it was famous. You know, it's still not too late to get in on the ground floor. What's cool once, is cool forever!

Royalty-Free Stock Photos for as low as $0.20USD/download or free

Icons, clipart, logotypes and more. All scalable and editable without any loss of quality.

Hand drawn or computer generated, we’ve got a great collection of illustrations for all your projects.

Millions of clips up to 4K, growing everyday. Stunning video by talented producers.

Everything sounds better with music. Explore our collection of music and sound effects.

Free image of the week

Download this image for free
Get all the latest info, freebies and a free trial delivered right to your inbox!
Stock Photos by Dreamstime

The right image anytime, anywhere with our mobile app for iOS & Android

Get it on the Apple App Store or Google Play Store

Automatic image classification, object detection, keyword suggestions, smart cropping and more can deliver better results for you and for your users.

Welcome to Dreamstime, worlds' largest community for royalty-free photos and stock photography. Established since 2000, our vast collection of professional stock photos is enriched daily with photos from talented contributors from all over the world.

Whatever image you need, we have you more than covered with millions of photos, illustrations and vectors, spanning a wide array of categories and themes, at prices that anyone - from large corporations to various magazines and blogs - can easily afford.

Do you have a project that calls for more than stock photos and images? Well, we haven’t forgotten about you! In addition to our deep well of royalty-free image assets, we also offer thousands of high-quality, professionally produced audio clips, royalty-free music and video clips. Like our database of images, our database of stock video footages and audio files continue to grow, with hundreds of new additions uploaded daily!